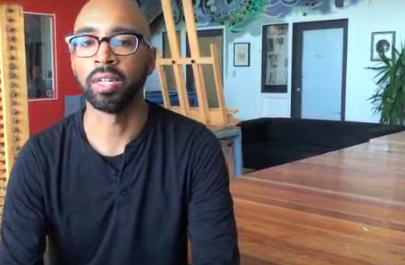 Joshua Mays was born in 1976 in Denver, CO. Joshua Mays is an illustrator, painter, and muralist. He traveled around the world after having lived in Philadelphia for a number of years before settling in Oakland in 2012. He lives there currently and has created murals in the city since his arrival.

Mays uses acrylic paint, latex paint, ink, pen, and a number of other mediums. He creates both black-and-white and colored pieces. His colored art is full of bright, saturated colors, wielding color theory to catch the eye while his black-and-white ink pieces are often more intricate. He also uses geometric and organic shapes to create unique designs and details, drawing inspiration from forms found in nature and technology.

Mays started drawing at 3 or 4 years old and began painting not long after that. Eventually, he studied illustration at Rocky Mountain College of Art and Design and also graphic design at the Community College of Denver. After college, he moved to Philadelphia where he worked for 8 years before traveling world-wide for exhibitions. He has done art commissions in the District of Columbia, Denver, Portland, Philadelphia, Oakland, London, Johannesburg, Mexico City, and Jakarta. It is not known when he started posting his art online, but his earliest artwork is dated 2012 on his portfolio website using the Tumblr platform. He also has Twitter, Facebook, and Instagram accounts that he frequently updates.

According to Mays, Oakland is an important community space because it is culturally and ethnically diverse, hosting people from a multitude of backgrounds. He has created murals in Oakland out of a desire to “connect with Oakland and create something that’s an ode to the place that . . . [he lives] . . . in, and an interactive piece” (Threadgould). By inviting people to visit each Oakland mural site, he hopes to encourage visitors to further interact with the area’s history and people. Mays sees murals as a “social and cultural DNA in an urban environment” and his Oakland murals in particular tell a detailed story about various ethnicities, social classes, and even political voices. He hopes that his work will inspire young and old people to paint, activating their creativity. He also believes that the Internet and technology will be important in the future for connections between people as well as connections between people and art.

Like other Oakland murals, Mays’s murals add artistic flavor to the city environment, providing splashes of color against the backdrop of asphalt roads and concrete buildings. His mural work in particular uses magical realism imagery and elements of sci-fi, showing people of color — especially women of color — in utopian visions. His art illuminates the creativity and talent of Oakland artists, and his work also voices his personal, cultural, and political beliefs as a black artist.

Mays’s works primarily focus on people as the subject matter, particularly women of color who look ethereal, hopeful, and uplifted. His work envisions an opportunity-filled future for people of color. While Mays has not personally claimed to belong to a specific arts movement, others consider him to be an Afrofuturist. Afrofuturism is a cultural, artistic, historical, and scientific philosophy that explores the intersection of technology with African/African diaspora culture. Afrofuturism combines non-Western cosmologies with elements of science fiction, historical fiction, fantasy, Afrocentrism, and magical realism in order to critique the present-day dilemmas of black people. Essentially, Afrofuturism combats racist stereotypes of black people and subverts science fiction by imagining the future faced by black people.

Mays’s legacy is in the individual commissions and murals that he has done all over the world. He also sells his artwork online, either as prints or merchandise such as wall fabrics and mugs. He mostly creates at his apartment/studio in Oakland. Mays spreads awareness of his work through gallery exhibitions and social media. In Oakland he has presented at the Athen B. Gallery, the Old Crow Tattoo and Gallery, and the Omi Gallery at Impact Hub Oakland. He has also presented at the Luna Rienne Gallery in San Francisco. Mays’s work was even featured in one episode of the Fox series Empire, a musical drama television series with primarily an African-American cast. Mays also has murals in Philadelphia, Denver, the District of Columbia, Portland, Mexico City, and Oakland as also mentioned previously. His murals range from the size of the side of a several-story building to a landscape-oriented mural on the wall in a restaurant called the Teni East Kitchen in Oakland and even simple murals on the sides of sidewalk utility boxes.

In 2014, Mays began a mural series, hosting an Indiegogo campaign for the project. Titled BEACON: An Oakland Mural Series, he wanted to scatter a story told through murals around different neighborhoods in Oakland. He wanted to contribute to the elaborate, creative conversation happening in the Bay Area and to inspire new artists. To this end, he planned to broadcast the creative process to locals and visitors alike. Unfortunately, the project was not funded to its funding goal by the October 1 deadline, although he did complete the four originally planned murals.

One of Mays’s largest works, the BEACON: Frequency Reader is in downtown Oakland at 17th St. & Broadway, which was unveiled on March 30, 2018. The piece features a woman of color among birds and organic details. Another Oakland mural is at the office of Beats Rhymes and Life, a 501(c)(3) non-profit organization dedicated to providing services encouraging healing and self-expression for youth. This mural features people of color and intricate, colorful design. Yet another is in his own neighborhood at East 24th St. and 23rd Ave. While not an Oakland mural, Mays has also painted an homage to Marian Anderson, one of the most celebrated African-American singers of the twentieth century, at the Marian Anderson Recreation Center in Philadelphia, PA.

Mays has also participated in collaborative projects with other artists, especially with groups aligned with his socio-political beliefs. He helped create a mural for the Mural Arts Philadelphia’s Art Education program with artists Eric Okdeh and King Britt and the kids and staff from The Haverford School and Mastery Charter’s Shoemaker Campus. His illustrations have been featured in the book The Moments, the Minutes, the Hours, a collection of poetry written by Jill Scott, a female African-American performing artist. Additionally, he created a collaborative mural with artist Ashley Montague on the side of Refuge PDX, a music venue in Portland, Oregon. Mays’s work has also appeared on the packaging for the LoveBar, an organic and fair-trade chocolate product of an independent Philadelphia-based company. Mays also designed the album cover for On The Cusp by Kat O1O, a female musician of color.

Mays strongly believes in art for profit and insists that artists should be paid fairly for their work so that they can live comfortably. He believes that art should be a sustainable career so that more people would be encouraged to become artists, and he dislikes the “starving artist” concept. Mays recognizes the high cost of living in the Bay Area specifically and wants artists to be able to live and create in the Bay Area. Mays also highly encourages using the Internet and social media for networking, comparing it to the “record labels and art galleries of the past,” (Genest) and he says that most of his business interactions occur on Facebook, where people can see his art.