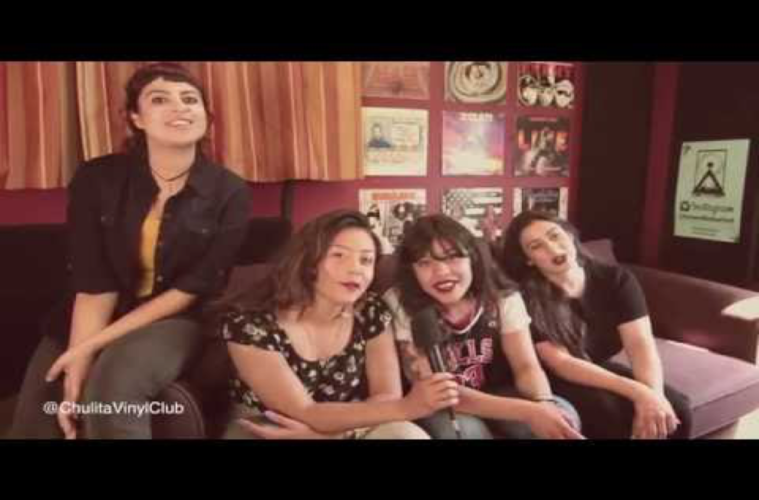 Chulita Vinyl Club is a collective of Latinx women, gender-nonconforming, queer, and LGBTQIA people of color who collect vinyl records and are invested in preserving the culture of vinyl deejaying. They originated in Austin, Texas but now also have active chapters in San Antonio, Los Angeles, San Diego, Rio Grande Valley, Santa Ana, and the Bay Area.

The collective uses their gatherings, parties, and events to express the importance of Latinx culture (at all its complex and beautiful intersections) and how music ties into the celebration of their lives, memories, and history. The phrase EL DISCO ES CULTURA (the record or dance/party is culture) encompasses their belief and motivation to maintain the Latinx culture through music, social gatherings, and interaction.

The club was founded by Claudia Saenz and now consists of up to 49 members and growing. Besides throwing amazing parties, they also create safe spaces, offer classes in deejaying to women (and support all music genres), and use social platforms to create visibility and protection of women’s rights. Bay Area chapter members include Mayra Ramirez (@hellabreezy), Crystal Mendoza (@chingona_chicana), Evelyn Gomez, Jahaira Morales, Andrea Gutierrez, and several others.

In a 2016 interview with KQED, the preservation of Latinx culture and space was the concern of the Bay Area chapter as gentrification became more prominent throughout Oakland. This preservation includes protesting against the injustices that occur in black and brown cultures and finding ways to express freedom.

Where I am from the party is political, which is why their phrase EL DISCO ES CULTURA really resonated with me. Sometimes, the dance floor (or nightlife) is all you have to feel free, to be seen, and to be heard, and a lot of what this collective stands for are expressions that have been mirrored in my own life through music and art. I think CVC is unique because they represent the underground, the counterculture that oozes not only in the Bay but throughout the country. Oftentimes, we as black, Latinx, and indigenous people (especially women, femmes, and gender-nonconforming people) are looking for safe havens to simply exist, and it is collectives such as Chulita Vinyl Club, Mustache, SNATCHPOWER, and countless others that reinforce space, community, and protection against the violence in the world.