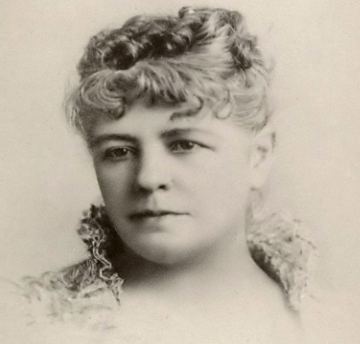 Ina Donna Coolbrith was born on March 10, 1841 in Nauvoo, Illinois. Ina was a writer, poet, teacher, editor, and librarian in the SF Bay Area in the 19th and the early 20th centuries. She published her writings and eventually became part of a San Francisco literary group. She was California’s first poet laureate.

Ina moved to the SF Bay Area in 1862 after the death of her infant son and the end of her abusive marriage. After she moved to San Francisco she continued her writing. In 1874 Ina decided to adopt three children and began working at the Oakland Public Library. She began to teach writing and mentor children, including Jack London and Isadora Duncan. Ina immersed herself in giving to children and teaching them the beauty in words. She built a strong community of writers, artists, activists, and educators. Coolbrith died in February of 1928 and was buried at the Mountain View Cemetery in Oakland.

Coolbrith attended high school in Southern California after traveling with her family by wagon train from St. Louis, Missouri. She started writing and publishing poems in her teens and decided to move north to settle in the SF Bay Area. Here she became a prominent figure in the literary community and befriended other local writers, such as Mark Twain and Bret Harte.

When Ina first moved to the SF Bay Area, she started out writing and editing for a local literary newspaper. She started publishing her work and soon became the talk of the town. Through engaging with the community, she made friends with other writers in the area. In 1868 she became an editor for her friend Bret Harte’s journal, the Overland Monthly, where some of her work was published. Her work has been recognized all around the world; she made a name for herself in the literary community and went on to serve the community. In 1874 she became a librarian for the Oakland Public Library and dedicated herself to her work of helping encourage literacy in children.

A lot of Ina’s poems show her love for nature and the outdoors. She talked a lot about the seasons and the beauty of California. When she moved from Southern California, she documented her travels through the beautiful scenery. Her connection to the Bay and her love for its beauty is what kept her here, and now she rests in peace in the Oakland Hills.