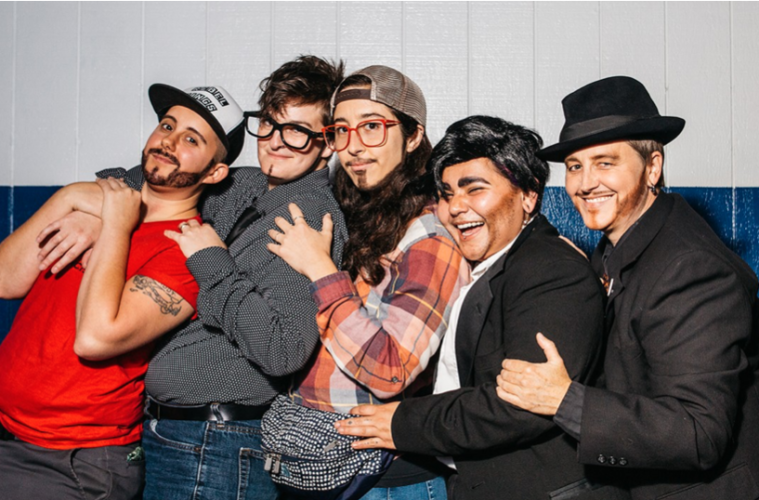 The Rebel Kings were established in 2010 in Oakland, California and are a group of drag kings. They are women and gender-expansive folks who lip sync dressed as men, though they often bring other gender explorations into their performances too.

The Rebel Kings began performing in 2010. They have a regular performance at the White Horse Inn, which has been open since at least 1933 and is the oldest continuously operating gay bar in the United States. The Rebel Kings are one of very few drag king shows in the East Bay and in general — though drag has been a performance tradition for more than a century, performing drag as men has historically had less appeal as a performance art than queendom. Vegas Jake and Dante Demoan have both been performing with the Rebel Kings since their start a decade ago.

The Kings came into drag through various paths, and many of them occupy roles as mentors or mentees to one another, helping each other navigate the drag scene. Having been with the Rebel Kings since their start in 2010 Vegas Jake thus is a “drag dad” to many of the newer performers.

One of the original Rebel Kings, Vegas Jake, a.k.a. Jen Shockey, has been doing drag for around two decades since a friend gave her a gold lamé costume that led to the creation of the Vegas Jake drag character. Shockey explains that there was an influential drag king who supported her in her entrée into drag, and she now tries to fulfill a similar role for new kings. Some of the kings start performing as a way to express their transness, and some are just looking to play with gender, while others perform as a way to manage mental or emotional health.