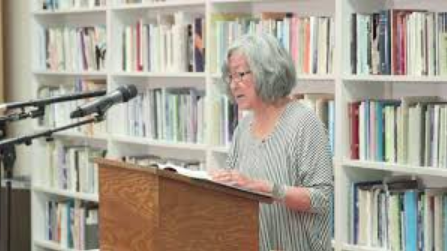 Nellie Wong’s focus is poetry, social justice, and feminism. She writes about her family history and identity as well as her experiences in the workplace with classism, racism, and sexism.

Wong was born and raised in Oakland in the ‘30s living in Chinatown. Her father immigrated to the United States in 1912. She worked in her family’s restaurant, The Great China restaurant, throughout her childhood. Wong toured China in 1983 with the US-China Peoples Friendship Association and returned to Oakland, teaching for two years at Mills College from 1983 to 1985. At this time, she was helping her friend and UC Berkeley colleague Merle Woo win a wrongful termination suit alleging discrimination. Though she continues to speak at conferences and on political panels, Wong still calls the SF Bay Area home.

Wong attended Oakland High School. She studied at San Francisco State University, where she was involved with the Women Writers Union on campus, which was organized around issues of class, race, and sex. She and other Asian-American writers organized the writing collective called Unbound Feet.

It could be argued that one of Wong’s inspirations to launch as an artist was working in her family’s restaurant growing up. Her poetry is rich in imagery of the restaurant, the waitressing and clerical tasks that she had performed, and the foods served within. Wong started to write and publish her poetry in her mid-30s when she attended San Francisco State University to study creative writing. Though a professor told her to throw away a poem that she had written in anger, a classmate told her not to listen to him. Wong credits her feminist classmates for encouraging her to keep writing.

Wong has performed her poetry at Bird & Beckett in San Francisco as well as The Poetry Center at San Francisco State University, to name a few places. She taught poetry writing at Mills College for two years, and she considers her workplaces to be a source of inspiration for her work.