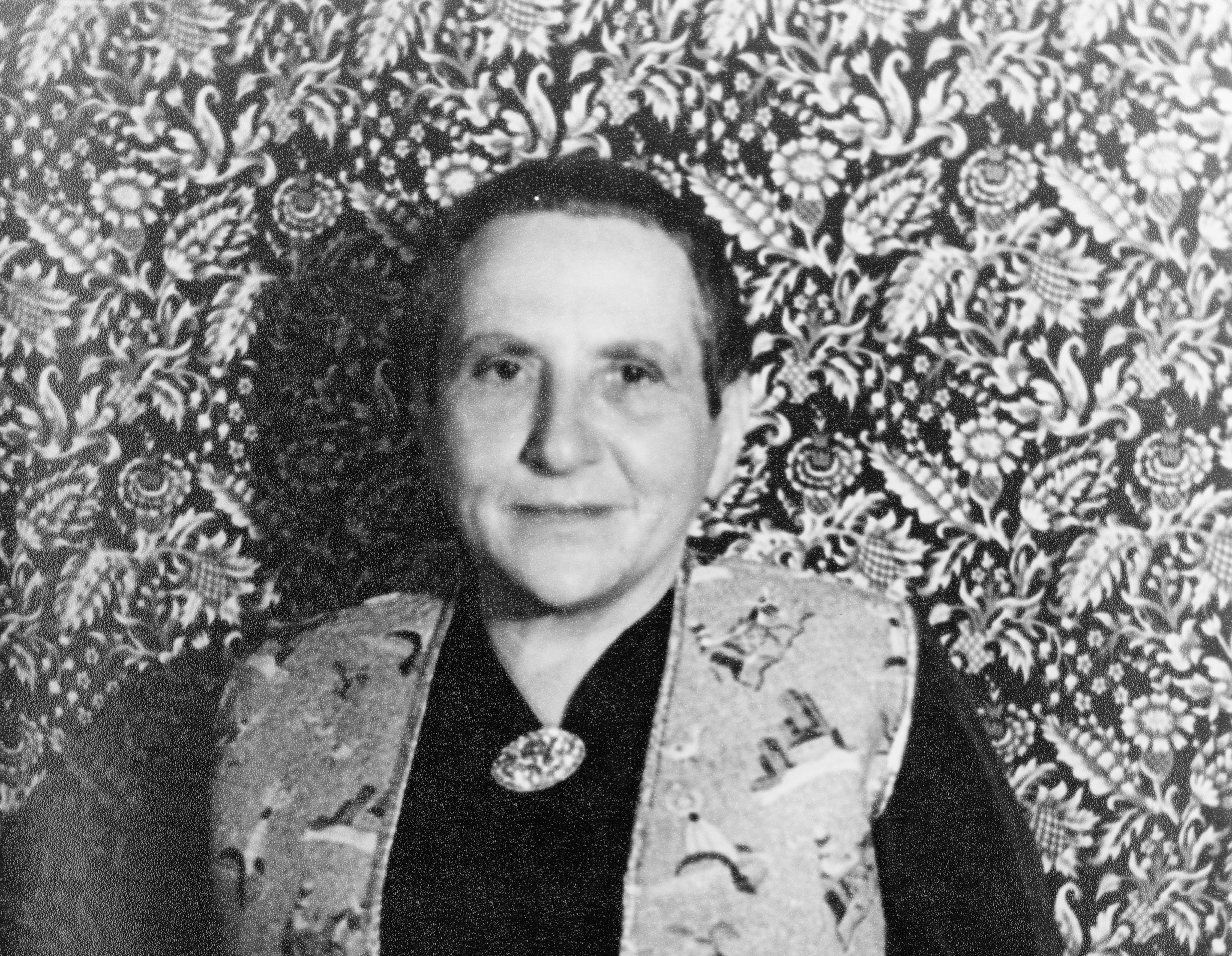 Gertrude Stein was born on February 3, 1874 in Allegheny, Pennsylvania and was a writer, poet, art collector, and advocate for the arts. She is known for her literary and artistic salon in Paris where she hosted writers and artists weekly. The most famous frequenters were writers such as Ernest Hemingway and F. Scott Fitzgerald, as well as artists such as Pablo Picasso.

Stein grew up in a wealthy family that frequently moved. She lived in Vienna, Austria and Paris, France throughout her early childhood. Most of the time that she spent in the United States was in Oakland. She arrived in Oakland with her family around the age of 6 and grew up there. Unfortunately, Stein’s mother passed away in 1888 and her father passed away in 1891. This resulted in her brother Michael moving his siblings to San Francisco, and in 1892 she moved to Baltimore to live with a relative. Stein followed her brother Leo when he left to enroll in Harvard and studied at Radcliffe College, an annex of Harvard before moving to Europe. She spent most of her life in France.

Stein did not have a consistent education, as she spent most of her early life between Europe and the States. She grew up multilingual and was fluent in German, French, and English. She only attended high school for 1 year but was able to enroll in Radcliffe College. Stein pursued a degree in psychology, and she notably studied under psychologist William James. She then went on to study medicine at John Hopkins University, but after failing to graduate, Stein moved to Europe in 1903.

Stein had written a few pieces during her college education, but she launched her pursuit as a writer after moving to Paris. Following in her brother Michael’s footsteps, she soon became an art collector, eventually collecting the works of Pablo Picasso, who later painted a portrait of her between 1905 and 1906. Her first piece, Q.E.D, written in 1903, was published after her death as Things as They Are. Stein published her first book called Three Lives in 1909. Her most successful book was The Autobiography of Alice B. Toklas, which she wrote in the guise of an autobiography authored by her life-long partner. She is most famously known for supporting the careers of young artists, which she did financially with her inherited wealth and with weekly salons in her apartment in Paris.

Gertrude seemed to have little interest in Oakland. Finding Oakland to lack a cultural environment nurturing of the arts, she spent much of her childhood there reading books, most likely spending time at her home. Her career as a writer began in Paris, which she spoke very highly of in comparison to Oakland. Both of her parents had passed away in Oakland, and so perhaps she had a negative association with the city. She wrote in Everybody’s Autobiography of going back to visit the house in East Oakland that she used to live in, writing,

It is a funny thing about addresses where you live. When you live there you know it so well that it is like identity a thing that is so much a thing that it could not ever be any other thing and then you live somewhere else and years later, the address that was so much an address that it was a name like your name and you said it as if it was not an address but something that was living and then years after you do not know what the address was and when you say it is not a name any more but something you cannot remember. (Madrigal)

Gathering from this quote, her old house in East Oakland seemed to have had sentimental value in her eyes, as she describes a bittersweet memory. One of her most famous quotes is, “America is my country and Paris is my hometown.” Considering that most of her time in the States was spent in Oakland, her associations with America could have been greatly shaped by her experience in Oakland. When describing a visit to her old neighborhood in Oakland, she writes how the neighborhood had barely changed, and then goes on to say, “When they used to ask me in America whether I had not found America changed I said no of course it had not changed what could it change to…” (Madrigal).