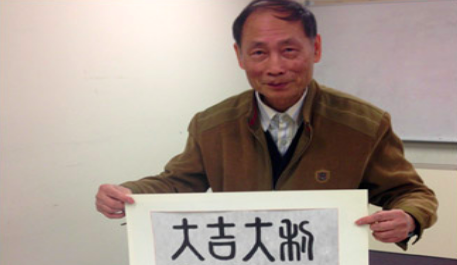 Shu Yi Liu was born in China on January 1, 1941. Mr. Liu’s style of art is Chinese drawing and painting where he also tries to bridge Eastern and Western traditions of art. He uses watercolors for brushstrokes resembling Chinese calligraphy and for landscape artwork. He specializes in Chinese art forms, including stamp making, calligraphy, and paper cutting. Mr. Liu’s artwork embraces the culture of immigration.

Mr. Liu studied drawing as a child and later studied medicine in China. When he moved to Oakland in 1987, he began teaching Mandarin and Cantonese at a school in Oakland where he knew the principal through family. He enjoyed teaching and noticed a lack of opportunities for children to be exposed to Asian and more specifically, Chinese culture, so he reached out to the Oakland Asian Cultural Center (OACC) and began teaching art there to children of different backgrounds. Mr. Liu can’t walk through Oakland Chinatown without running into his former students.

Mr. Liu has shown his art internationally, even exhibiting his work at the Oakland Museum of California.