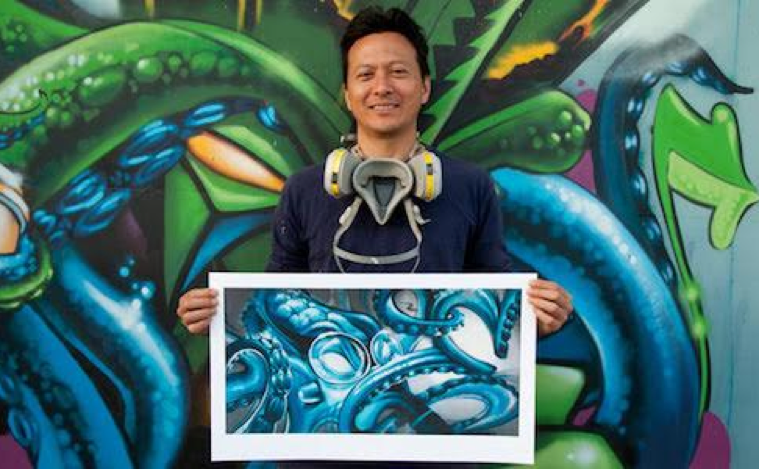 Estria was born in Hawaii. Estria is an internationally recognized muralist and the co-founder and creative director of the Estria Foundation (TEF). It is a non-profit organization using art in public to transform communities and at the same time bring attention to community issues. Estria attended ‘lolani School in Honolulu, Hawaii from 1980 to 1986 and got a BFA in Illustration from both the University of San Francisco and the Academy of Art in 1992.

Estria began painting in Hawaii in 1984, and he has completed almost 1,000 murals worldwide. His murals have influenced the “Golden Age” of graffiti (1980s) in San Francisco. He pioneered painting techniques and was instrumental in the development of the stencil tip. The Estria Foundation launched an 11 city series of murals including the Philippines, Palestine, and South Africa called Water Writes to raise awareness of critical water issues such as the importance of safe drinking water.

Estria spends time in Honolulu, San Francisco, and Oakland. When he is in Hawaii, Estria visits Hawaiian communities; Hawaii is where he had co-founded the Estria Foundation, launched the Mele Murals program, and volunteered with 808 Urban. This mural about clean and safe water awareness is from his foundation as part of a collaboration called Water Writes.