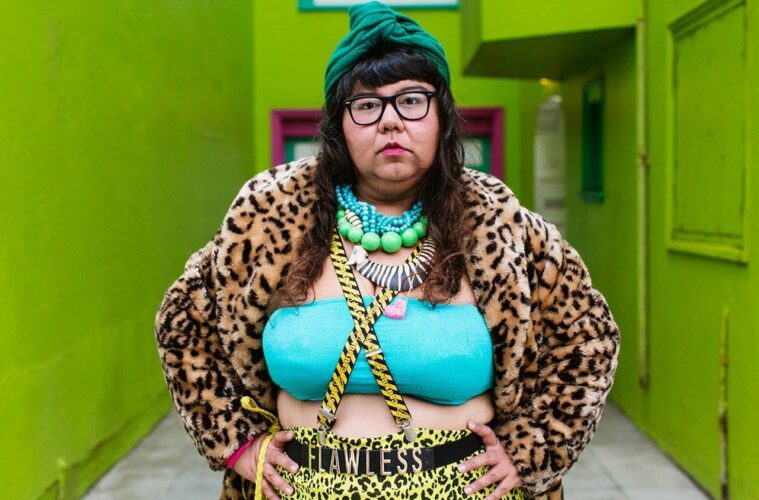 Virgie Tovar was born in 1982. Virgie Tovar is an activist and author based in San Francisco, California. She runs a blog that promotes body positivity, showcasing plus-size fashion. Her activism sheds light on societal shaming of female bodies and sexuality and on how such shaming affects women and queer communities. Additionally, Tovar runs Babecamp, an online course that teaches women about diet culture and how to avoid its toxic message. Tovar also focuses on the intersection of race with the body positivity movement and feminism, saying: “When you take into account the preexisting stigma around race and gender and then you add the fat piece, you’re talking about a stigma load that could be really, really potentially harmful” (North).

Tovar is a leading lecturer on fat activism and rights of overweight people and has been to many conferences both in the East Bay and around the world to share the message of body positivity. Tovar argues that diet culture is harmful to women and must be dismantled through women becoming empowered by their body the way that it is. The body positivity movement seeks to teach women to accept and love their bodies and pushes for the media to represent more realistic bodies in their advertisements, movies, TV shows, and other main forms of communication. Tovar considers her work to be political because it addresses issues that are readily addressed in the media such as sex work. Tovar also explains that “[m]y work is also political because I’m doing it in this body.” Because Tovar is a person of size, she says that people politicize her body, but she invites them to see her the way that she is: an overweight, queer woman of color.

Virgie Tovar was born in San Pablo, California. Being from the East Bay and now living in San Francisco has allowed Tovar to travel frequently to Oakland to give talks on how our culture demonizes fat people and to teach plus-size women to accept their bodies. Oakland has been a major influential center for the body positivity movement for some time. There are many publications that have come out of Oakland that have contributed to the movement, including Wear Your Voice, an intersectional feminist magazine that posted an article in 2015 tagged #BeyondBeauty. Oakland is also home to many yoga and fitness centers that aim to be open and accepting to people of any size.

Tovar’s first major introduction to Oakland was through the Nolose conference. Tovar describes getting off the bus in Oakland and coming across a group of fat women at her hotel in swimsuits, something that she had never seen before. She explains that all of the women were looking amazing and so confident in their bodies despite being dressed in swimsuits that would never be considered appropriate for an overweight woman to wear in general society. Tovar says that this was the first time that something clicked in her brain and she felt connected to the body positivity movement and fat activism. Tovar has used this story many times in both her book You Have the Right to Remain Fat and in her TED talks to explain the moment she realized that not only could overweight people feel comfortable in their own skin but that she could feel comfortable with her own body as well. She considers Oakland as the place that truly launched her into the body positivity movement and as the birthplace of her activism.

Virgie Tovar’s work has spanned many different disciplines, including writing, public speaking, radio, and dancing. When asked in her 2013 interview on the podcast We Want the Airwaves if she considered herself to be an artist, Tovar said that while she does consider herself to be an artist, it took a long time to come to terms with that identity. She did not feel like she could call herself an artist until she was being paid for her art, a feeling she said that she knows is common amongst queer people and people of color.

Tovar’s main artform is writing; she has written and edited multiple pieces and has been a contributor to many major publications. Tovar was a writer at BuzzFeed covering plus-size fashion, and she currently writes a column called Take The Cake that covers a wide range of topics such as sex, self-care, and parenting. Tovar has also edited a book called Hot & Heavy: Fierce Fat Girls on Life, Love and Fashion, as also mentioned previously. Tovar’s first book was Destination DD: Adventures of a Breast Fetishist with 40DDs, which she published in 2007. However, Tovar had been active in body activism and the sex-positive community for much longer, receiving her MA in Human Sexuality from San Francisco State University in 2011.

Tovar published a book called You Have the Right to Remain Fat in 2018. This book unravels the cultural obsession with dieting and its discrimination of plus-size people. In addition to this recent project, Tovar keeps a blog where she covers body positivity, fashion, oppression, and feminism amongst other topics. Entries include “Lipstick, Feminism, Being a Conscientious Boss Lady, Etc.” where Tovar discusses getting her own lipstick and using this palette chat as a segue to talk about entrepreneurship. Another entry is titled “#TRUTH: We Live In a Culture That Promotes Dani Mathers’ Behavior” where Tovar covered Dani Mathers, a Playboy bunny who in 2016 took a picture of an overweight woman in a changing room without her permission. Tovar discusses similar incidents that have happened to her and unpacks how such actions are rooted in societal fatphobia.

Tovar’s fame continued gaining ground in 2012, when the book that she had edited — Hot & Heavy: Fierce Fat Girls on Life, Love and Fashion — was published. The book is an anthology of stories about what it is like to be fat and focuses on the positive side of being a plus-size woman in a world that values thinness. This book was the first of its kind and was a catalyst for Tovar’s public career. Before this publication, Tovar had worked at CBS Radio as the host of her own show, The Virgie Show and as a plus-size fashion writer for BuzzFeed. During her time at BuzzFeed, Tovar wrote articles about plus-size Halloween costumes and haircuts for curvy women, making fun of “summer body” culture in an article. Tovar started the hashtag campaign #LoseHateNotWeight, which is what launched Babecamp, her online body positivity course. #LoseHateNotWeight was featured in many different articles such as The New York Times. In an interview with Proud2Bme, Tovar explains how #LoseHateNotWeight was a product of years of dissatisfaction with her own body and constant dieting and the start to spreading her message against diet culture.

In 2017, Tovar was announced to be on the Yerba Buena Center For the Arts’ (YBCA) top-100 list of cultural influencers “[f]or fearlessly exploring the intersection of size, gender, and race.” This list contains names of other famous artists such as Jordan Peele, Trevor Noah, and Rachel Maddow. In addition to this accomplishment, in 2017 Tovar toured with a TEDx talk called “Lose Hate Not Weight.” In this TEDx talk Tovar made fun of the dietary reform movement and illustrated the uselessness of the body-mass index (BMI). Tovar explains in her blog that movements such as the dietary reform movement often aim to shock people with charts and statistics when in fact a lot of the information is pointless.

Miller, Kelsey. Review of You Have the Right to Remain Fat, by Virgie Tovar. Amazon,

—. “The Power of Snark in the Age of TedTalk.” VIRGIE TOVAR, 23 Apr. 2015, https://www.virgietovar.com/blog/my-fake-ted-talk-nomodouchebro-diets-the-new-bmi.