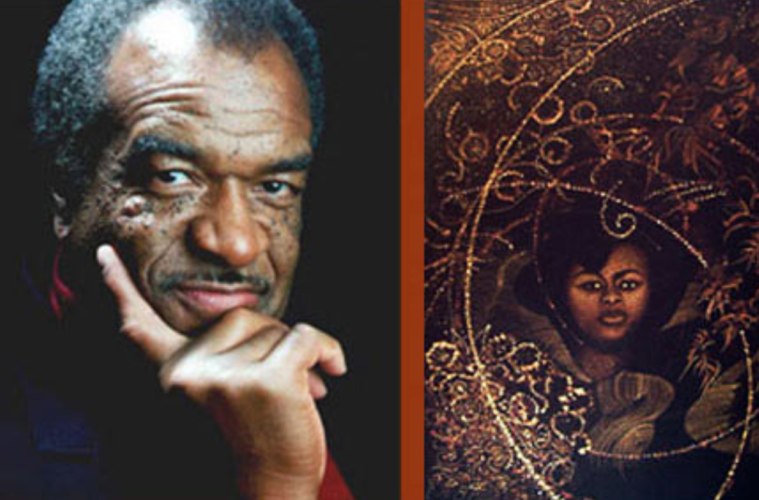 TheArthur Wright is a pointillist bleach artist who expresses the culture of blackness in his paintings. Wright uses the simplicity of his minimal tools to express what cannot be said, and to emphasize the black experience and feelings: to create a spiritual connection most importantly with the things that are often inexpressible but which reach out to the heart and soul, and connect to truth.

TheArthur Wright was born in Little Rock, Arkansas in 1940. He attended high school in Seattle, Washington. He served in the Air Force, and after being discharged from his station in Japan, he pursued college at Central Washington State and settled in the Bay Area in 1964. There, he published his writings and sold art in the early seventies. TheArthur became a board member of the Artship, which was a seaborne arts venue in Oakland, a position he maintained until 2003. In 2003, Wright sold his Califia, Queen of California for the 2003 Carnaval in San Francisco. Throughout his career, his works have appeared at colleges all around California: UCLA, Stanford, Santa Rosa JC, Sonoma State, and others. Presently, Wright is part of the board of directors for Prescott-Joseph, a non-profit organization in Oakland, California.

One of Wright’s first major launches as an artist was his Califia, Queen of California painting, which shows careful gold accents in great quantities. This painting, along with many of Wright’s other artistic works, has been featured in the African American Historical and Cultural Society in San Francisco, which also exhibited other artists’ interpretations of Queen Califia.

The painting below is titled Can You Hear the Drums Beat? and is inspired by the African drums beaten by Zulu drummers. Found under Wright’s “Africana” paintings, this giclee canvas is currently available for purchase.