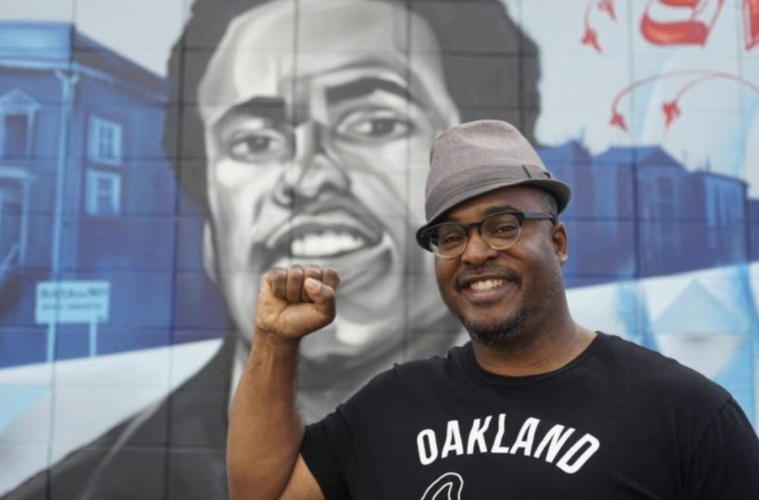 Refa One, a.k.a. Refa Senay, was born in Oakland on July 16, 1972. Refa One is an aerosol artist (using spray paint), muralist, illustrator, activist, and educator. He is truly a multifaceted artist: he does photography, graphic design, and collage as well as painting. His mission is: “to serve the people” (Harshaw).

Refa One has always lived here in Oakland. His parents were members of the Black Panther Party; his father was the official photographer for the Party. Growing up around a powerful movement rooted in Oakland undoubtedly influenced Refa One to be an agent of change. As Oakland’s black population continues to decline, Refa One stands as a pillar of cultural resistance where erasure due to gentrification is prevalent. According to Amira Ali, he is “doing important and relevant work in West Oakland — historically black neighborhood — reclaiming space and restoring culturally significant murals (African cultural representation) removed by gentrifiers.”

Refa One said that he had some college, yet he is formally trained as an artist. Hip-hop culture has always been a teacher. He was also surrounded by his father’s photographs of the Black Panther Party while growing up, and his mother is a professional artist, so the visual representation of resistance has taught him a lot. Now Refa One is a mentor and educator himself. He is the director of AeroSoul, “a community institution and cultural resource that documents, promotes and develops the legacy and rich history of the African/African diaspora’s writing culture” (“AeroSoul Art”).

Refa One said that he can’t think of a time when he wasn’t an artist: his launch was his birth. He began his spray can art career at the age of 12 and grew up surrounded by hip-hop culture. He painted with the well-known San Francisco-based graffiti crew BSK in the 1980s. Refa One made history, though, on May 19, 1994 when his controversial mural of Malcolm X was unveiled at SF State University. The mural depicted Malcolm X surrounded by dollar signs, Stars of David, and skulls and crossbones to illustrate Malcolm X’s criticism of Israel. Students in favor of the mural camped out, guarded it, and washed off paint when the school tried to have it covered up. It was eventually sandblasted off the wall permanently.

“I like hanging out in cultural centers that promote black self determination. ie: the black community, places where style writing (graffiti art) exist.”