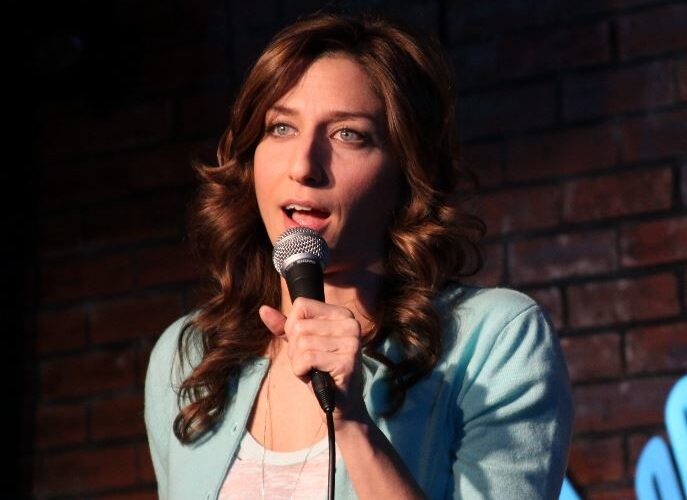 Chelsea Peretti was born on February 20, 1978. Chelsea Peretti is a successful actress, writer, and stand-up comedian; she is best known for her role as Gina Linetti on the television sitcom Brooklyn Nine-Nine. Peretti is native to the Bay Area, born in Contra Costa County and raised in Oakland and El Cerrito. In both her stand-up and her recurring role on Brooklyn Nine-Nine, Peretti’s comedic legacy is her trademark socially awkward and somewhat narcissistic persona — her Netflix comedy special, for instance, is called One of the Greats. Peretti also has a strong Internet following; her Twitter account, on which she is very politically outspoken, was ranked as one of the top 75 Twitter accounts to follow by Paste Magazine.

Her career launched after graduating from Barnard College. She aspired to be an actor and was interested in theatre but still wanted a liberal arts education, which led to her majoring in English Literature with a concentration in Writing. While at Barnard, Peretti started to gain some experience in the entertainment industry through an internship at Saturday Night Live, where she was an assistant for Lorne Michaels. Though she originally thought she wanted to be involved with theatre, she found that she was not a huge fan of the theatre department at Barnard and ended up getting involved in improv instead. A coworker at her first temp job out of college made an influential suggestion that Peretti try stand-up. Peretti fell in love with performing as a comedian; she also began working various small writing and acting jobs.

Peretti quickly received widespread attention for comedic web projects such as Blackpeopleloveus.com and the New York City Rejection Line, a phone number that people could give out in response to unwelcome advances. She was also part of a comedy troupe formed in 2004 and most active through 2012 called Variety SHAC with three other comedians, Shonali Bhowmik, Heather Lawless, and Andrea Rosen. They put out short films on YouTube every month, featuring themselves as four eccentric women living in a tree house together in Central Park. Peretti created two web series independently as well: Making Friends and All My Exes (2009). Her web projects were innovative at the time; not many people were using the Internet as a creative platform yet, at least not in comedy. Peretti had some help from her brother, Jonah Peretti, who had been through MIT Media Lab and later went on to found BuzzFeed. Peretti’s YouTube series and websites focus heavily on relationships, both platonic and romantic. She uses her own insecure and somewhat socially awkward persona as a way of satirizing social and cultural norms, a recurring theme throughout most of her work.

Though she is known for being open about her political beliefs on Twitter, Peretti is seldom political in her stand-up. One rare example of political outspokenness in her comedic work was one of Peretti’s first web projects, Blackpeopleloveus.com (2002), which she created with her brother, Jonah. The website, which features positive “testimonials” from black people for a fictitious white couple, Johnny and Sally, caused controversy. While some understood the satirical nature of the website, satirical websites of its kind were practically nonexistent at the time. Many came across the Perettis’ web project unaware that it was meant to be satire. Chelsea Peretti ended up going on Good Morning America essentially to defend the project, saying: “I think when you’re using humor, it’s not something that everyone will think is funny[.]…I don’t think humor is always a universal thing. If everyone thought it was funny, I would be surprised[.]” Ultimately, the goal was to create “a site that satirizes subtle forces of racism” (Britton), according to Jonah Peretti.

Following her early days of Internet-based comedy, Peretti ended up working not only as a stand-up comedian but as a writer and actress as well. She wrote for popular, critically acclaimed shows such as The Sarah Silverman Program and Parks and Recreation. Notably, she also started her own podcast, Call Chelsea Peretti, in which she uses her trademark awkward sense of humor to lead conversations with random callers into absurdity. In 2013, Peretti landed a recurring role on the sitcom Brooklyn Nine-Nine as apathetic secretary Gina Linetti. Peretti costarred on Brooklyn Nine-Nine with her childhood friend, Andy Samberg, who also introduced Peretti to her now-husband, comedian and director Jordan Peele.

The beginning of Peretti’s stand-up special on Netflix, One of the Greats includes photographs from her childhood growing up in Oakland; the photographs characterize Peretti as coming from a comfortable middle-class family. Her parents divorced when she was a year old. Peretti and her brother, Jonah spent their childhoods going back and forth between El Cerrito and Oakland. Their father was an attorney, and their mother was a public school teacher. As a third grader, Peretti was in the same class as other future comedian Andy Samberg who went to Willard Middle School in Berkeley at the same time as other future comedians, Akiva Schaffer and Jorma Taccone. As a child, Peretti trained at the American Conservatory Theater in San Francisco under Craig Slaight, who trained many other successful actors such as Winona Ryder and Brie Larson. Peretti went on to attend The College Preparatory High School. She has said in interviews that she developed her self-deprecating sense of humor partly as a form of social survival; in school, she “was picked on constantly. ‘I really felt like a freak,’ she said. ‘Everything about me was different. I was skinnier then, I had like a perm and these awful braces and wore dark lipstick. I really was a mess. In high school, people started to find me more attractive, but there’s still that part of me that finds me a complete freak. When people online say I’m disgusting, I’m like, “I know.”’” (Medchill)

Today, Peretti mostly describes her relationship to Oakland through her childhood experiences growing up there. Most of her career has taken place in New York City and then LA, where she eventually moved to work on The Sarah Silverman Program. Although she is often linked to New York because she lived there for so long, Peretti loves the Bay Area, which is reflected in her decision to shoot her Netflix stand-up special in San Francisco at the Palace of Fine Arts. Peretti remembers the Palace of Fine Arts from her childhood, as well as the Exploratorium, which used to be located there. “It’s just so cool, when your life has changed so much to go back to somewhere that you loved as a kid and be able to do what you loved doing again as an adult. There’s just something really cool about that” (Peretti). Additionally, Peretti mentions in an interview with SF Weekly that part of the reason she moved to LA was so she could be closer to her family in the Bay Area; she visits them frequently. When asked about her thoughts on Oakland and its evolution as a city, Peretti responded that while on some level she wishes for things to stay the same, on the other hand she thinks that “Oakland is so awesome. . . .I feel like it makes sense that people would move there” (qtd. in Smith). Other places that Peretti enjoys visiting when she comes back to visit the Bay Area are Gordo’s for their burritos and Fentons for their sundaes. “There’s so many places I love in the Bay Area[,]” said Peretti, it’s “definitely somewhere you can have endless good meals.”

Britton, David. “Almost 15 years ago, ‘Black People Love Us’ taught the internet how to troll.” The Daily Dot, 29 Feb. 2020, https://www.dailydot.com/unclick/history-of-black-people-love-us/.