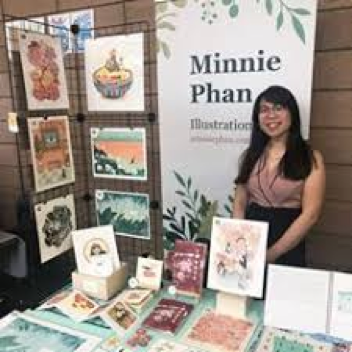 Minnie Phan is an illustrator and cartoonist based in the Bay Area. Her specialties include editorial and children’s book illustrations. Her work can be seen in zines, major company designs, and art exhibits across the Bay Area. She spent undergrad at California College of the Arts honing her illustration skills. This opened up many doors for her in illustration, with her first solo show taking place at the Oakland Asian Cultural Center. Phan says that Oakland has influenced her art immensely since it has allowed her to find safety and comfort in exploring all of her identities in her work. As a queer person and daughter of Vietnamese refugees she finds that these identities influence her illustrations.

Phan grew up all around the East Bay, moving to different areas within the East Bay. She was born in Stockton and would often visit Oakland (specifically Chinatown) with her parents as she was growing up. She moved to Oakland in 2010, ringing in the New Year with celebrating 10 years of being based in Oakland.

Phan focuses on illustration, animation, and comic art and design. Phan has a BFA from California College of the Arts. Prior to this she attended a Pre-College program at CCA, referred to it by her high school teacher Michael Doyle. Phan recalls Doyle being a huge supporter of her artwork and always reminding her of her potential. In her junior year of college Phan was awarded a scholarship, which she chose to use to study abroad in Vietnam. During her time there, she was able to work on her art and really think critically about what it meant to be a daughter of Vietnamese refugees and how that influenced her art.

Interestingly, growing up Phan was always moving and had to switch elementary schools 5 times. High school and college were influential times for her because she was able to see herself grow and evolve within more consistent environments. In 2017 Phan taught classes for the community in Richmond at the Richmond Arts Center.

In a recent interview with Phan she said that she feels her biggest “launch” moment was getting into the Pre-College program at CCA. It proved to her that she could do this for a living. Her first solo show at the Oakland Asian Cultural Center was another pivotal moment for her art. She was able to have this solo show through her involvement in the CCA community. Her solo show led her to become a freelance illustrator and designer. She has a wide range of clients: her primary clients include Google, Starbucks, NPR, Live Nation, Abrams Books, Oakland Magazine, and many others.