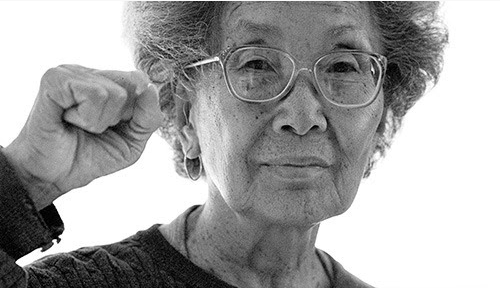 Yuri Kochiyama was born on May 19, 1921 and died on June 1, 2014. She was born in San Pedro, CA while she spent many of her later years in Oakland, CA as well as nearby cities in the East Bay.

Kochiyama practiced the art of radical activism. While she was growing up, she attended church, taught Sunday school, and eventually graduated from San Pedro High School. She went on to study English, journalism, and art at Compton College, a junior college in Compton, CA. Almost immediately after graduating, Pearl Harbor was bombed and the US government placed her family in an internment camp where she met her future husband. These experiences, followed by the development of a close friendship with Malcolm X, influenced her work as an activist. She was a supporter of many movements, including black separatism, the anti-war movement, Maoism, and the redress movement to obtain reparations for the internment of Japanese-Americans.

She lived many places before settling back in the San Francisco Bay Area, most notably living in New York City where she was involved with underserved communities, eventually meeting and becoming fast friends with Malcolm X. Kochiyama was present at the scene when Malcolm X was assassinated and she was photographed holding him during the aftermath of the assassination for Life. She continued her work as an activist in Harlem, becoming one of the leaders of the Asian-American movement in the late 1960s. She continued her work by becoming active along the West Coast, being a bridge between communities on both sides of the country.

Kochiyama relocated to Oakland in 1999 to be closer to two of her children living in the San Francisco Bay Area. She became part of the People’s Resistance Against US Terrorism, a group that held meetings at the West Oakland Branch Library once a week. Besides being involved with local activist groups, Yuri stayed busy speaking at events, attending conferences, researching, writing speeches, and became a subject of documentaries. She was said to be stubborn, fighting vigorously for any cause that piqued her interest right up until her death in 2014, when she was 93.