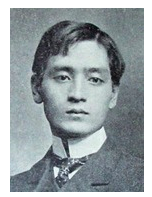 Yonejiro (Yone) Noguchi (野口 米次郎) was a journalist as well as a writer who wrote both poems and prose, including novels and books. What made him especially unique as a writer in the late 19th and early 20th centuries is the fact that he could write in both English and Japanese.

Yone was born in Tsushima, Japan on December 8, 1875. In Japan, he studied both English and Japanese literature at Keio University in Tokyo. He studied the works of Thomas Carlyle and Herbert Spencer as well as zen, a Japanese philosophy and haiku, a Japanese form of poetry. Eventually he would end up teaching there as a professor of English.

In 1893 Yone first arrived and lived in San Francisco, working as a journalist for the Freedom and People’s Rights Movement. He also spent a little time in Palo Alto at a prep school for Stanford. It wasn’t until a year later in 1894 that he visited the poet Joaquin Miller in Oakland and decided to become a poet himself. He stayed at Miller’s home in Oakland for four years learning from and working for him. There he worked on his poems and Miller introduced Yone to other bohemian writers and artists. He left for the East Coast in 1900 and would continue his travels from there. His time in Oakland was brief but impactful on both his writing and the writing community in the San Francisco Bay Area.

Though Yone had been writing poetry long before being officially published, the act of his being published is something to note because of how rare it was for a Japanese writer to be published during the late 1800s and the early 1900s. His first poems were published in the San Francisco magazine, The Lark. His first book of poetry that was published was Seen and Unseen: Or, Monologues of a Homeless Snail. His first novel, The American Diary of a Japanese Girl, was published in 1901. This novel was the first English-language novel published by a Japanese writer in the States. Leonie Gilmour would have a considerable hand in getting Noguchi’s work ready to be published as his editor, later becoming his lover and the mother of his son.