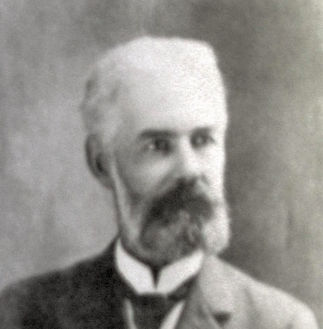 Walter J. Mathews was born on May 2, 1850 in Markesan, Wisconsin and died on November 20, 1947 in Oakland, California. Mathews was an architect who became the city architect for Oakland in the 1890s.

Mathews designed many notable Oakland buildings, including the First Unitarian Church of Oakland, built from 1890 to 1891, noted for its stained glass windows and arching redwood spans and for the fact that while it was damaged by the 1906 San Francisco earthquake, it was not destroyed. The church is listed as California Historical Landmark #896 and is located at 685 14th Street in Oakland.

Mathews designed the mansion of Arbor Villa, the residence and 35-acre estate of Oakland business magnate Francis Marion “Borax” Smith, built between 1893 and 1895 that cost $275,000, or roughly $7.9 million in 2019 if adjusted for inflation (“Arbor Villa”). His family gradually sold off parts of the estate, formerly located on Park Boulevard between East 22nd and East 28th.

Mathews’s brother Arthur was a well-known painter, and another brother, Edgar, was also an accomplished architect. His father was also a well-known architect. Walter trained under his father’s direction, joined his father’s office at age 24, partnered with architect Ezra F. Kysor in Los Angeles, and was a partner in his father’s firm until 1886 when he established his own practice.

While working in Los Angeles with Kysor, the first buildings that they designed were the Anaheim Hotel located at 182 West Center Street in Anaheim and Mr. P. Kern’s building at Main Street and Spring Street in Los Angeles, both built in 1875. Both buildings have long since been demolished. One building that he designed with Kysor that still stands is the Cathedral of St. Vibiana in Los Angeles, built in 1876. Known simply as “Vibiana” today, the location is no longer a cathedral and is an event venue.