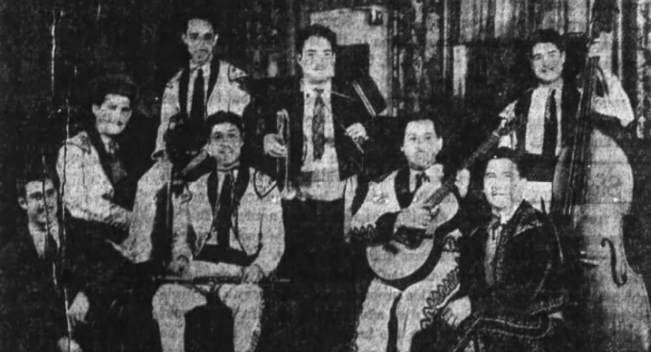 Martinez was a talented musician, athlete, and philanthropist. He is most known for having started one of the first local Mexican music groups that performed under the name Los Caballeros. The group was popular among Latinx communities in the East Bay, and more specifically, in West Oakland where many Latinxs were living. The band’s style was described as Mexican dance music and orchestral music; the band performed songs that were popular in Mexico. His music was frequently broadcast on KLX, a local radio station that operated out of the Tribune Building.

Martinez joined the United States Army at age 16 during World War I and then served again in the Merchant Marines during World War II when he was in his late 30s. During his service in World War II he used his talents as a musician and athlete to provide entertainment for his fellow servicemen. He also advocated for them to obtain athletic equipment.

An amateur boxer, Martinez trained for boxing at the YMCA and won the Golden Gloves twice in the ‘40s. He volunteered his time to help teach boxing classes and inspired his son to become an amateur boxer as well. He was known to have taught boxing classes around Oakland, for example, at the now-closed Union Recreation Center. Martinez boxed for many years but was forced to stop boxing after sustaining an injury.

Roman Martinez died at Veterans Regional Hospital in 1950 and was survived by his two sons, Manuel and James, his daughter, Marilyn, and his wife, Rose. He is buried in plot 60 at Mountain View Cemetery under the name Roman C. Martinez. His daughter, Marilyn remained in the SF Bay Area, residing in Montclair until her death in 2010. She continued the legacy of supporting local artists by operating a fan club for The Tubes and encouraging her son, Paul Wood to pursue a career in music.