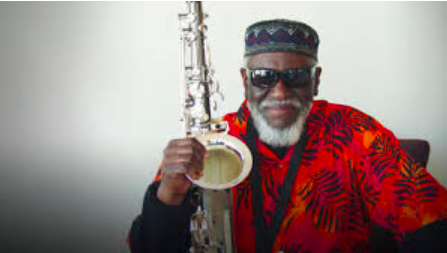 Pharoah (Ferrell) Sanders was born on October 13, 1940 in Little Rock, Arkansas. Sanders is a world-renowned jazz saxophonist with a sound that ranges from raw and abrasive to graceful and serene. He played with John Coltrane’s groups in the mid-1960s and is known for his iconic overblowing, harmonic, and multiphonic techniques as well as his use of “sheets of sound,” a term used to describe the improvisational style of Coltrane.

Sanders learned how to play music from an early age, playing church hymns on the clarinet. His initial artistic accomplishments were in the visual arts, but when he was at Scipio Jones High School in North Little Rock, Arkansas, Sanders began playing the tenor saxophone. After finishing high school in 1959, Sanders moved to Oakland, California. He briefly attended Oakland Junior College where he studied art and music.

When Sanders moved to Oakland after high school in 1959, it was just five years before Coltrane would ask him to sit in with his band. In Oakland, he could play in both black and white clubs. People called him “Little Rock” because he still maintained his Arkansas roots. He moved to New York in 1961, where he struggled to make ends meet. He lived with Sun Ra, a free jazz luminary with whom he performed as well. However, Coltrane discovered Sanders in 1963 at The Village Gate in New York, and near the end of 1964, he asked Sanders to sit in with his band.

Sanders was practically launched into the world as a musician, as he was born into a musical family. Both of his parents taught music: his mother taught privately and his father taught in public schools. His first instrument was the clarinet, but he switched to the tenor saxophone in high school under the guidance of his band director, Jimmy Cannon. Cannon was the one who exposed Sanders to jazz for the first time. Sanders was a fan of Harold Land, James Moody, Sonny Rollins, Charlie Parker, and, of course, John Coltrane. As a teenager, he played blues gigs around Little Rock for $10-15 dollars a night, backing blues greats such as Bobby “Blue” Bland and Junior Parker.

Sanders performs all around the world, and one of the places that he has performed at in the S.F. Bay Area is Yoshi’s. Yoshi’s was founded in 1972 as a sushi restaurant in North Berkeley by three best friends. Since then, Yoshi’s has become one of the world’s most respected jazz performance spaces. Its 17,000 square feet and 310 seats are nestled in the heart of Jack London Square in Oakland, California. Sanders had a show at Yoshi’s on November 29, 2019.

Grace Cathedral in San Francisco is another one of Sanders’ haunts. Its current cathedral started undergoing construction in 1910 following the destruction of the previous building in the 1906 earthquake. The Gothic cathedral was completed in 1962, and it became the third largest Episcopal cathedral in the nation.

Another haunt of Sanders was an old, abandoned tunnel in the Marin Headlands near the Golden Gate Bridge. It was abandoned near the end of WWII and was finally sealed off in 2011. Sanders would perform with Paul Arslanian accompanying on the harmonium and the tunnel created deeply haunting acoustic resonance. You can listen to a video of the music here: https://www.youtube.com/watch?v=Y7EGQzn8e1k.