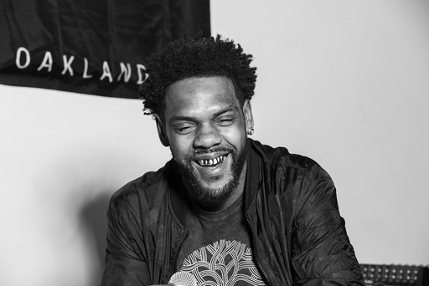 Keak da Sneak a.k.a. Charles Kente Williams was born on October 21, 1977 in Brewton, Alabama but moved to Oakland, CA when he was a few months old. Williams is a musician; specifically, his practice is rapping — a type of music that relies on rhythmic vocal delivery usually delivered over a backing beat. He is most popular for coining the term “hyphy” in 1994, which is short for hyperactive. “To get hyphy” has come to describe a type of dance or an attitude in which individuals move or act in a fast-paced and ridiculous manner.

He attended Allendale Elementary School. He later performed in talent show performances at Bret Harte Middle School where he made the connection with a friend who became a musical collaborator during the early stages of his career. In high school, he formed a duo called Dual Committee with fellow rapper, Agerman. Soon after, they evolved into a group with another classmate and they became known as 3X Krazy. The group eventually disbanded in 2000 and each member pursued solo careers, with Keak da Sneak reaching commercial success following the release of his hit song “Super Hyphy” in 2005.

Inspiration for his music included West Coast artists such as Too $hort, E-40, Mac Dre, NWA, the X-Clan, Big Daddy Kane, and Biz Markie. He describes his self-expression as coming from the feelings of experiences as opposed to inspiration coming from books or research. Keak describes the beginnings of the term hyphy, saying that “[i]t evolved. In 1992, I called it being ‘on the hype tip,’ then it was ‘highly reactional,’ then ‘highly reactionary.’ And then I called it ‘hyphy.’ But now it’s more than that, to me: it’s super hyphy now.” KMEL was one of the first radio stations to play his music to a larger audience. Aside from music, the hyphy movement is defined by dancing, as also mentioned above, sideshows, and ghost riding.

Keak da Sneak has been reported to spend most of his time in his Sacramento home — a calm farm that also houses cattle and goats. Most recently, he performed at Rolling Loud 2019 at the Oakland Coliseum to an excited and supportive crowd of fans.