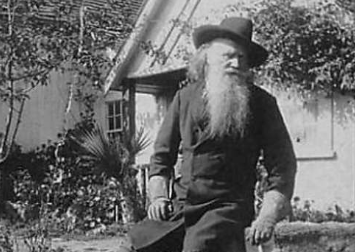 Joaquin Miller held many different types of jobs throughout his life: he was a lawyer, judge, conservationist, and poet. He was born on September 8, 1837 as Cincinnatus Hiner Miller near Liberty, Indiana. Miller’s parents and he headed to the West in 1852 and lived in the Willamette Valley, Oregon. Within 2 years Joaquin Miller left for California in search of gold.

He lived among Native Americans near Mt. Shasta in California and briefly attended college. In 1868, Miller’s first publication, the book of poetry Specimens, was published by William D. Carter in Portland. His first book and second book of poetry titled Joaquin et al. were both largely ignored by American critics, even by the “Bards of the San Francisco Bay,” to whom the second book was dedicated.

Miller visited and ended up staying in the SF Bay Area in 1870, where he met Ina Coolbrith, Oakland’s first librarian and California’s first poet laureate. She suggested that Cincinnatus take the pen name “Joaquin” Miller. He was inspired by Joaquin Murietta, known as the “Robin Hood of the West,” a Sonoran forty-niner and a vaquero who was a famous outlaw in California. Miller began to be recognized as the “Poet of the Sierras.” He titled a poem “Oakland” to express his love for Oakland.

Thou rose-land! Oakland! thou, mine own!
Thou sun-land! leaf-land! land of seas
Wide crescented in walls of stone!
Thy lion’s mane is to the breeze!
Thy tawny, sunlit lion steeps
Leap forward, as the lion leaps!

And thou, the lion’s whelp, begot
Of Argonauts, in fearful strength
And supple beauty yieldeth naught!
Thine arm is as a river’s length.
Thy reach is foremost! Thou shalt be
The throned queen of this vast west sea!

Yet here sits peace; and rest sits here;
These wide-boughed oaks, they house wise men:
The student and the sage austere,
The men of wondrous thought and ken.
Here men of God in holy guise
Invoke the peace of paradise.

Be this my home till some fair star
Stoops earthward and shall beckon me;
For surely Godland lies not far
From these Greek heights and this great sea.
My friend, my lover, trend this way;
Not far along lies Arcady.