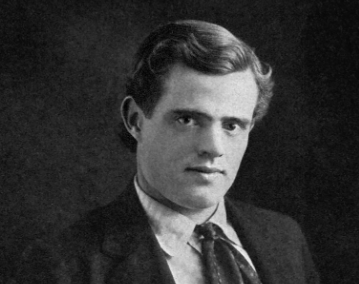 John Griffith Chaney was born on January 12, 1876 in San Francisco, and later changed his name to Jack London. He was an American novelist, journalist, and social activist.

London was born in San Francisco but was brought to Oakland to be raised after his mother, Flora Wellman married his stepfather, John London. He was brought up by a black woman, a former slave named Virginia Prentiss, who largely acted as a mother figure to Jack London.

He graduated from Oakland High School and attended UC Berkeley, although he didn’t complete his studies or publish in any of the school’s publications.

His experiences included years of sailing his boat as an oyster pirate to earn money, hoboing, joining the Socialist Party, dropping out of UC Berkeley, and participating in the Klondike Gold Rush. By 1893 Jack London was beginning to submit his short stories to various magazines and newspapers. This was a particularly important time for writers, because newer and faster printing technologies were being used, which in turn developed a wider readership across the country. He reached celebrity status as a writer in 1903 when his novel Call of the Wild was published. He was 27 years old.

Throughout his career, London was considered an intellectual, social activist, photojournalist, documentarian, war correspondent, publishing more than 20 novels and countless articles. He was married twice and had two daughters from his first marriage. He died on his ranch in Sonoma County in 1916, and Jack London State Historic Park was created to commemorate his life and legacy.