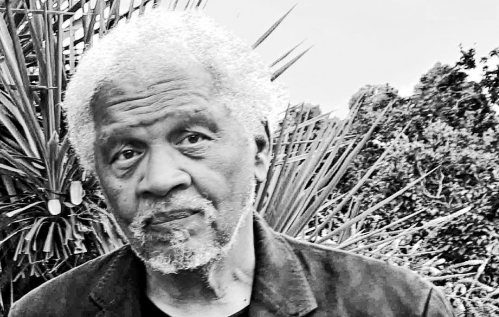 Ishmael Reed was born February 22, 1938 in Chattanooga, Tennessee. Reed is a poet, musician, novelist, playwright, publisher, artist, and more. Reed is accomplished, with several awards and over 30 published books.

Before Reed moved to Oakland in 1979, he had lived in El Cerrito for a few years. Although Reed admits to having been skeptical about Oakland before moving there, his art is considered to be largely associated with Oakland. He initially moved to Oakland with his wife to purchase a house. His love for the city is apparent in his poems and essays about Oakland. His poetry is featured at the Richmond BART station as well as on a mural in North Oakland. Reed is also an activist and is very knowledgeable about Oakland history. He has even written a guide on Oakland called Blues City: A Walk in Oakland.

Reed grew up in Buffalo, NY where he completed public high school and attended the University of Buffalo. He then received an honorary doctorate from Johnson C. Smith University and proceeded to become an English professor at the University of California at Berkeley and teach at other universities as well, including the California College of the Arts.

In 1962, after moving to New York, Reed founded two newspapers and focused on developing his writing skills at the Umbra Writers’ Workshop. The Free-Lance Pallbearers was Reed’s first novel in 1967. He also is a jazz pianist, and his lyrics have been recorded in several blues and jazz songs. His poem “When I Die I Will Go to Jazz” is featured on the north gate of the SFJAZZ Center. He has written consistently throughout his career and continues to produce work even after retiring from his position at UC Berkeley as a professor. He has supported other writers and artists and is widely considered an uplifting member of and advocate for the community.

According to an article in The Mercury News, Reed wakes up every day at 4:30 to work on his writing at his home. Seeing as he works at home, I imagine that he spends a lot of time there. He is now retired from his position at Berkeley, where he worked for over 30 years, and where he had lived before moving to Oakland. Reed has traveled around the world with his wife but chose to settle in Oakland. His love for the city is evident in his works ranging from poetry to lyrics. He has an appreciation as well as concern for the city. When he was asked in an interview if Oakland is a city that fosters creativity, he replied, “I wouldn’t go as far as to say that, but I will say that it has very nice weather, and it is very comfortable here. An ongoing concern in Oakland is that the crime situation has gotten out of hand, especially the murder rate, and the city doesn’t respond to crises very well” (Reed).