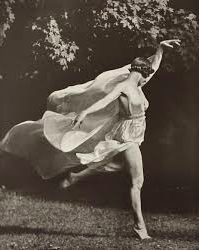 Isadora Duncan, born on May 26, 1877 in San Francisco, California, was a founder of modern dance. Her style emphasizes natural movement and flow. Her main source of inspiration was ancient Greece.

After her father left the family, Isadora’s mother Dora moved the family to Oakland. There is little record that can be easily accessed of Isadora’s early years in Oakland. However, it is known that she got her start as an artist in Oakland. During her childhood, Isadora attended public school and she was also taught by the poet Ina Coolbrith. She dropped out of school at the age of 10 with her older sister to become a dance teacher. She ridiculed ballet as “affected grace and toe walking” (“Isadora Duncan”).

After childhood, she left California and spent the rest of her life in the Midwest, on the East Coast, and in Europe teaching herself and others how to dance.

Isadora first danced in Chicago and New York City, but the people there didn’t like her style and rejected her way of dancing. There was no easily accessible or discoverable record of Isadora dancing in Oakland, California specifically since her recorded performances took place in Europe and on the East Coast. After her style of dancing was shunned in New York City, she left for Europe at age 22 and danced in the parlors of the wealthy until she was able to afford her own studio. Her next performance in the Bay Area was in 1917 in San Francisco.

https://www.mercurynews.com/2012/06/02/modern-dance-pioneer-isadora-duncan-once-called-oakland-home/ – A look into Isadora’s life in Oakland, California