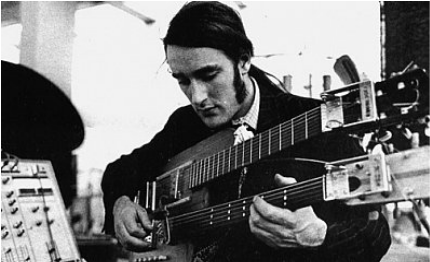 Jeremy Webster “Fred” Frith was born on February 17, 1949 in the small town of Heathfield in East Sussex, England. Frith describes himself as a songwriter, composer, multi-instrumentalist, and improviser. Creating primarily experimental and avant-rock music, he performs with various kinds of guitars, bass, keyboards, and the violin.

Frith moved to Oakland in 1997 to begin work as a composer-in-residence at Mills College, where he would teach improvisation as a professor. He was excited to come to Mills because of its history as a haven for experimental music. According to his personal website, Frith “was deeply honored to be invited to a place where so many iconic musicians had either studied or taught, and my almost twenty years in Oakland have been invigorating and inspiring.” Frith retired from Mills in 2018 and has been teaching improvisation at the Musik Akademie in Switzerland and advising the Austral University in Valdivia, Chile in the creation of the School of Sound Art.

Coming from a musical family, Frith began taking violin lessons at age 5 and learned how to play piano soon after that. He taught himself guitar at 13 and formed blues and rock bands in high school, graduating from Cambridge University in 1970. Frith also had a 6-month residency in Marseille, France in 1990 working with rock musicians.

One of the bands that he performed with in high school was the Chaperones, which covered songs done by the Shadows and the Beatles and eventually began producing blues music. His first public performances were in 1967 at folk clubs in northern England. Frith met Tom Hodgkinson in 1968 at Cambridge University, where they formed the avant-rock band Henry Cow based on their mutual passion for experimental music.

Henry Cow gained international recognition for its cutting-edge music and performances and was signed by Virgin Records in 1973, remaining together until 1978. Frith also released his first solo album, Guitar Solos, in 1974, which was composed of improvised and unaccompanied guitar songs. This picture shows the album cover of Guitar Solos:

Frith, Fred. “This and that.” http://www.fredfrith.com/this-and-that/.

http://www.fredfrith.com/
Fred Frith’s personal website is a great source of information about his music and life.

https://www.allmusic.com/artist/fred-frith-mn0000178916/biography
This website includes a biography and Frith’s discography, along with other information about his work and music.

https://www.psychedelicbabymag.com/2012/01/fred-frith-interview-about-henry-cow.html
This is a link to a pretty extensive interview with Frith covering various topics, including his musical upbringing and time in Henry Cow.