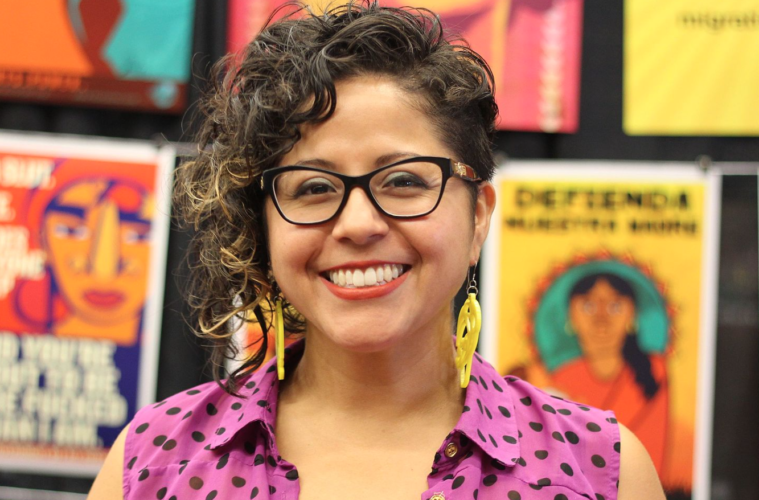 Favianna Rodriguez was born on September 26, 1978. Favianna Rodriguez is a self-identified queer Latina with Afro-Peruvian roots who currently resides in East Oakland. She is a political activist and organizer whose work focuses on immigration, global warming, economic justice, sexual liberation, and women’s rights. She is also an internationally renowned artist whose current work focuses on pleasure and change for an equitable future using the power of the artist. Having produced art that features women of color for decades, she hopes that her legacy inspires other artists of color to produce work for social and political change — specifically work that represents underrepresented narratives. Now as an educator, Rodriguez aims to encourage youth of color to participate in the arts.

Rodriguez’s parents emigrated from Peru in the 1960s and moved to Oakland. They first settled in the Fruitvale district, a predominantly Latino neighborhood, where Favianna spent the rest of her childhood years. Rodriguez’s mother operated a travel agency and ran a bilingual phone service in medical clinics. Her father was a dental technician and also did janitorial work. Both parents hoped to provide the best that they could for their daughter as she was growing up. When Rodriguez was eight years old, her mother enrolled her in an art class that focused on printmaking taught by various East Oakland Chicano artists who were also activists. Rodriguez credits these artists with cultivating her early artistic interest as she continues to respond to social injustice through her art.

As a child, Rodriguez showed interest and promise in art and was allowed to enter various art contests. She even appeared on television to present her artwork. Rodriguez’s artistic talent was clear. However, being a child of immigrants and also a first-generation college student, they insisted that she pursue a more lucrative career in medicine or engineering.

While Rodriguez was in middle school, a crack cocaine epidemic was ravaging Oakland’s neighborhoods, propelling the city’s murder rate to unprecedented heights. Rodriguez pleaded with her parents to let her go live with an aunt in Mexico to better shape her adolescence in a different environment. According to Rodriguez, she was “kind of going down the wrong path and hanging out with the wrong people” (“Favianna and the New Print Revolution”). While in Mexico City, Rodriguez had hoped to find stability but instead experienced culture shock as she realized how Americanized she was. Rodriguez found the culture in Mexico to be traditional; it was not an environment where she could discuss her feminist ideology without being seen as an outsider. In fact, Rodriguez had to move out of her aunt’s home and ended up renting a room from an older woman. She recalls her time in Mexico as being a significant time in her maturation as an adolescent and as a period that inspired a new wave of art.

Rodriguez recognized that Mexico’s traditional culture and politics inhibited what she wanted to do and present artistically. Rodriguez recalls talking

a lot of shit to boys, I would be very open with my ideas but in a way that was viewed as being too liberal. I would hang out with a lot of the queer girls — or the girls that didn’t know they were gonna be lesbians in their future, you know what I mean? I would hang out with all the outsider kids. All the gay boys, all that. I would just hang out with all the outcasts. … It was culture shock for me, but for everyone who interacted with me, they were probably like, ‘Wow.’ (“Favianna and the New Print Revolution”)

Being that she was an “outsider,” Rodriguez had time on her hands to produce artwork: usually big paintings and other drawings. As ambivalent as she was about her environment and the culture, it was in Mexico that Rodriguez learned about the powerful political works of Frida Kahlo, Diego Rivera, and Che Guevara. Their artwork resonated with Rodriguez. Additionally, Rodriguez analyzed the political context of grand murals and other artwork in Mexico City and noticed similarities to the murals in Oakland when she returned to Oakland.

It was in high school, however, that Rodriguez began to cultivate heavily her artistic focus and political drive. Rodriguez excelled academically and was enrolled in numerous honors courses. More often than not, she would find that she was one of the only students of color in these classes.

Also, while Rodriguez was still in high school, California introduced Proposition 187, an anti-immigration ballot initiative supported by over half of California’s registered voters. The ballot initiative was intended to prohibit undocumented individuals from receiving non-emergency medical care, attending public schools, and receiving social services. The state also began to target affirmative action programs, which directly impacted low-income students of color. Most voters were also supporting Proposition 21, which passed in 2000, enabling a new wave of racial profiling by state officials and mass incarceration of young people of color.

Rodriguez had long been aware of the anti-immigrant, anti-Latino sentiment in California, and she responded to this state-sponsored discrimination by involving herself with other Latino activists. She staged walkouts in her high school and began getting involved in activism against the growing number of juvenile detention centers across her home state. Rodriguez began posting flyers around her community and in her high school informing anybody who would listen about the proposed ballot initiatives’ institutionalized discrimination. Through these flyers, pop-art, and free art given away at rallies, Rodriguez’s art began to acquire a strong political identity, honed to support the causes that she was invested in.

Following her graduation from Skyline High School, Rodriguez accumulated a number of scholarships and was set to continue her education at the University of California, Berkeley. Despite her artistic passions, she began working toward majors in architecture and ethnic studies to abide by her parents’ wishes. As a child of immigrants, Rodriguez accepted the point of view that art was not a serious or realistic career.

However, an unexpected pregnancy changed Rodriguez’s course of action when she opted for an abortion. She took her first art class at UC Berkeley soon after the procedure and was offered an opportunity to produce artwork at Self Help Graphics & Art in East LA with reputable artists such as Yolanda Lopez. Self Help Graphics & Art is one of the largest printmaking and nonprofit art centers dedicated to the production of Chicana/o and Latina/o art. Rodriguez produced a significant number of prints during that time and experimented with different art mediums. At Self Help Graphics, she was finally working on her art full-time instead of on the side like a hobby.

After her time in LA, Rodriguez realized that she felt unhappy and unfulfilled at Berkeley. She felt that the institution was stunting her creative growth and artistic desires especially because it was hard to create genuine and provocative work under Eurocentric constraints. As a college student, she continued the activism she had begun in high school: being involved in protests and creating art to share at rallies or through flyers around campus. However, as an architecture and ethnic studies student, she was unable to fully dedicate her time to her craft. Rodriguez came to the conclusion that, although she had been groomed to succeed in academia by her parents, Berkeley was not the place for her; it was organizing and making political flyers that gave her a sense of purpose. She chose to leave Berkeley behind.

Soon after Rodriguez left Berkeley, her artistic career took off. In 2003 she started the printmakers’ collective called Taller Tupac Amaru with two of her artist friends, Melanie Cervantes and Jesus Barraza. The studio aimed to revive screen printing and use it as a tool for political activism and change. One of Rodriguez’s well-known installations includes Migration is Beautiful, which she began to produce around 2012 as a way to begin changing the discussion around immigration. The monarch butterfly is meant to represent migration and the right to travel freely across borders and is now hailed as an immigration rights symbol. Rodriguez credits black artists of the civil rights movement and their slogan “Black is Beautiful” as inspiration for her collection: their phrase aimed to dispel the notion that black features, such as hair or skin color, were unacceptable. Rodriguez hopes to humanize immigration issues with “Migration is Beautiful” and continues to fight for immigration and equality today.

Rodriguez launched the bilingual graphic design studio Tumis Inc. and the muralist program Visual Element in the early 2000s. According to Rodriguez, the goal of Tumis was to integrate art with new emerging technologies as a means for accessibility. She also helped found the EastSide Arts Alliance and Cultural Center in Oakland’s San Antonio neighborhood. Additionally, Rodriguez directs CultureStrike, a national arts organization that engages artists, writers, and performers in migrant rights. In 2009, she co-founded Presente.org, a national online organizing network dedicated to the political empowerment of Latino communities. Rodriguez has said that Presente hopes to bring forth a new and welcoming sentiment toward immigrants in the United States. Rodriguez is also a member of Justseeds Artists’ Cooperative: 29 artists committed to making prints and designs focused on social, environmental, and political change. An exhibition of her work, Messages of Sisterhood opened at La Casita Cultural Center in 2013.