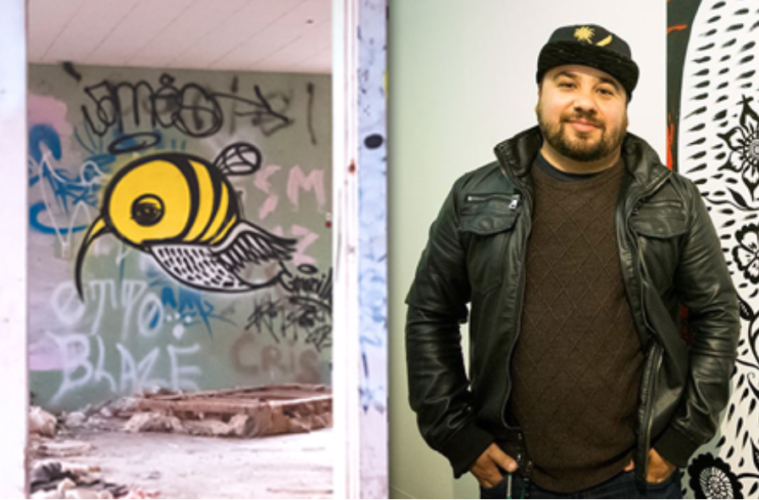 Chris Granillo was born in the Coachella Valley in 1982 and is a muralist, painter, printmaker, street artist, and sculptor. He is particularly interested in folk art, the environment, the human figure, and found object art.

Granillo relocated to Oakland in 2002 to be closer to the Bay’s thriving art scene and because the majority of his family lives here. According to an interview in Coachella Valley Weekly, Granillo told his mother before moving that “I don’t see my wings spreading here and growing in the desert and not a lot of opportunities, so I packed everything I owned in the back of my truck and left. I got to spread my wings in Oakland and it [is] the best experience I have had” (Morones). Granillo is still a successful artist living and creating in Oakland today.

Granillo attended high school in Cathedral City and College of the Desert in Palm Desert. He had hoped to attend art school but was unable to for financial reasons. Instead, Granillo continued developing his art, finding that “you didn’t have to go to art school to be an artist” (Morones).

When Granillo relocated in Oakland, he began posting his illustrations around town and eventually helped form Project Elefont, an artists’ collective that creates art involving urban scenes and wildlife. Through Project Elefont, Granillo spearheaded a project transforming Solano Way in East Oakland into a hub for mural art.

https://localwiki.org/oakland/Chris_Granillo
This page on Granillo by Oakland Wiki includes a list of murals that he has created in Oakland, along with their locations.